Will A Bearded Dragon Eat A Gecko? (Crazy Must Read) 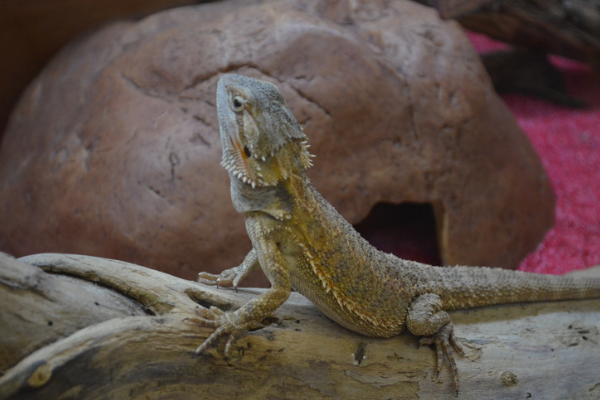 Geckos and bearded dragons are two popular reptiles to have as pets. As they’re both beautiful animals, you might think about keeping the two together.

Instead of looking for a tank buddy for your beardie it may be best to make sure you provide it with the perfect environment instead. Have a look at this bearded dragon set up on Amazon that I highly recommend.

Will a bearded dragon eat a gecko?

Even though the majority of bearded dragons are picky eaters, preferring mealworms above all else, they would still eat a leopard gecko when push comes to shove.

Unfortunately, dwarf bearded dragons react in the same way as regular bearded dragons. Despite their smaller size, they would even eat a leopard gecko.

Will a bearded dragon eat a crested gecko?

As we’ve discussed, bearded dragons are omnivores and will eat anything. In fact, they’ll even eat their own young sometimes! This means that crested geckos are not safe around them and would be considered as a food source, just like their leopard gecko relatives. Will a bearded dragon eat a gecko?

Are bearded dragons aggressive to geckos?

Both geckos and bearded dragons can be aggressive when they don’t live alone – and that’s just among the same species.

When you throw size into the mix, it’s clear that bearded dragons will have the upper hand if left alone with geckos.

In fact, due to their smaller size, geckos would not be able to defend themselves around a bearded dragon – it would be like a human living with an aggressive giant and they wouldn’t stand a chance.

A bearded dragon would always have the upper hand and whatever he wants, he would get. They’re territorial in nature and would harass geckos for no apparent reason other than to show their dominance.

It’s likely that you wouldn’t ever have a time where both animals are able to relax. For example, a gecko could be eating or sleeping then all of a sudden the bearded dragon could attack him just because he is in the same enclosure.

Adult bearded dragons have very sharp teeth and lots of biting power. If we combine these with the size of a gecko, you’ll realise just how easily a gecko could get injured.

Unfortunately for those of us hoping that our pets would defy the odds, it’s just not worth the risk.

Simply put, both bearded dragons are territorial bullies and would be aggressive to gain authority and respect in their space.

The natural instincts are too strong in this case.

Can a bearded dragon live with a leopard or crested gecko?

I think by now you might have realised that this would never be a good combination.

In fact, you shouldn’t even keep two bearded dragons in the same tank. You could have a tank as big as a room or reptiles that seem really placid and friendly but sooner or later, the worst would happen.

It’s also important to note just how different the species are in terms of their habitat and needs.

Bearded dragons and geckos are from different parts of the world and their requirements for housing are entirely different. It would be impossible to make an enclosure work for the two different species.

Bearded dragons come from dry woodland in Australia. These animals are very active all day long and adore the sun.

They need the temperature to be very high with lots of bright lights to make them healthy and happy.

For beardies, you need a very high UVB bulb to prevent them from getting sick. Like us, bearded dragons sleep at night and are active during daylight hours.

Geckos, on the other hand, are nocturnal creatures and they hunt at night. These reptiles don’t need lots of light, unlike bearded dragons.

Many gecko owners don’t put lights in their terrarium so that they have a diurnal cycle. Instead, they provide a heat mat or heat stone in the enclosure.

With bearded dragons, though, they prefer heating up their bodies with a heat lamp.

Since you need a very high temperature for a bearded dragon, you will struggle to have a temperature that is low enough for a gecko.

What animals could you keep with bearded dragons?

If you’re desperate for your bearded dragon to live with another animal a tortoise might be the best bet.

Tortoises are really interesting as pets too and, as they’re herbivores, would be a good choice for sharing a terrarium with a bearded dragon.

As herbivores, they won’t be a predator for the bearded dragon even when they’re a lot bigger.

What’s more, they won’t be prey either because they are very well-protect by their shells.

Even if your bearded dragon is larger than the tortoise, the tortoise will be safe from danger as he can hide in his impenetrable shell.

What you must consider if you’re thinking about putting a tortoise in with your bearded dragon is space. Tortoises on their own need lots of space.

This requirement is even bigger when paired with a bearded dragon.

You should also make sure that the tortoise you choose comes from a hot and dry environment like your bearded dragon.

Given half the chance, a bearded dragon would eat a leopard gecko or a created gecko.

Their omnivorous diet means that given the right amount of hunger, nothing would be safe in their terrarium.

What’s more, bearded dragons have such different natural habitats that it would be impossible to cater adequately for both in the same terrarium.

If you do want your bearded dragon to have company, you could try putting him in a terrarium with another bearded dragon. It’s worth noting though that you should keep two males together as these are likely to become aggressive.

Finally, you do have other options if you really want company for your bearded dragon.

Choosing a large enclosure and sharing it with a tortoise is a good combination. The tortoise would be protected by its shell.

As long as the tortoise comes from a similar natural habitat and environment to a bearded dragon, they can live successfully together for many years.