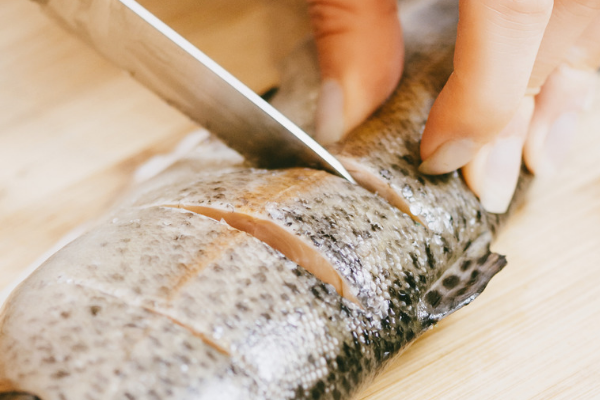 Can leopard geckos eat fish? We all know that unlike other pet lizards such as Crested Geckos and Bearded Dragons, the Leopard Gecko is actually a insectivore. This means that they predominantly only eat meat in the shape of small insects, worms and other invertebrates.

Due to the fact they can consume meat many owners of leopard geckos may wonder if this also includes fish. I mean surely their bodies must be capable of breaking down fish proteins if they can eat meat?

So this post is going to let you know if it is safe to feed your leopard gecko fish as part of its diet. You may want to know what leopard geckos actually do eat.

Can leopard geckos eat fish, is it good?

At this point I just want to jump straight in and give you the quick answer. Further on in the post I will go a little more into the benefits although mainly negatives of feeding your leopard gecko fish.

So that is the short and sweet answer. Unfortunately you really should not be feeding fish to your pet leopard gecko.

Nows let’s take a deeper dive into it and I will go through all of the reasonings so that you can decide for yourself if it is a good idea.

Before we start I wrote an awesome and detailed leopard gecko care guide that will teach you all about the appropriate diet.

The benefits of feeding fish to your leopard gecko.

I am going to be totally honest with you from the start, there are not many benefits to feeding fish to your pet Leo. But here goes anyway…

That is it, all of the benefits of fish in the diet are above.

The negatives of feeding fish to your leopard gecko.

Can leopard geckos eat fish? Now it is time to have a look at some of the negatives.

Hopefully after reading that nasty list of negatives you will know that it is best to keep your leopard gecko away from fish.

Can A leopard gecko eat tuna?

Tuna is one of the most popular fish in the human diet. It is high in protein and full of omega-3 acid and tastes yummy.

As mentioned above though it is one of the worst offenders when it comes to dangerously house amount of the toxic heavy metal called Mercury.

Final thoughts on feeding fish to a leopard gecko.

Can leopard geckos eat fish? I know this topic has been pretty grim really and it has probably come as a surprise that you can’t feed your leopard gecko fish.

Ultimately though it is not a natural food for your Leo and could cause it some health issues in reality.

There are however plenty of different insects and worms that you can try feeding to your leopard gecko instead that are healthy and nutritious.